Edit
watch 01:25
Jurassic World: Dominion Dominates Fandom Wikis - The Loop
Do you like this video?
Play Sound
This article is a stub. You can help PHOGS! Wiki by expanding it. 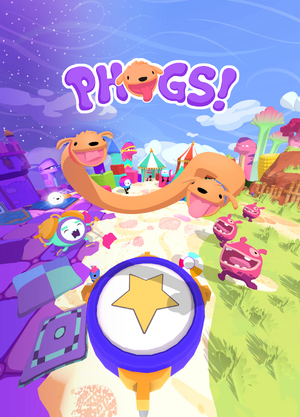 Red and Blue are the main playable characters of PHOGS!. They are a dog connected by a stretchy belly. Their names are most likely derived from their respective collar colors, with the red collar being named Red and the blue collar being named Blue.

Personality: While their personalities are never directly mentioned in game, we can infer that they enjoy sleep, eating, and playing. Red is typically associated with the Type A personality, while blue would then be a Type B personality. However, the box art of the game contrasts with this theory, as Blue (Left) is more inclined to be seen next to Sleep Land, and Red (Right) is more inclined to be seen in food land. However, despite their differences, they love play roughly the same amount.

Anatomy: The anatomy of Red and Blue remains a mystery, but Phog theorist "Sugar Nova" has hypothesized that its possible through ancient Phog magic, with the stomach of Red and Blue actually being a black hole.

Community content is available under CC-BY-SA unless otherwise noted.
Advertisement